In their Ezekiel Declaration, three Queensland Baptist pastors, and now 3019 ‘Church Leaders’ who have signed their declaration[1], say that one reason why our governments should not introduce a ‘vaccine passport’ is that the ‘conscience should never be coerced’.

Really? There is no occasion where it is reasonable for a Christian to have to do something against their sense of right and wrong? I don’t think so.

‘Coerce’. ‘to persuade someone forcefully to do something that they are unwilling to do’[2].

‘Conscience’. ‘a person’s sense of whether a behavior is right or wrong.[3]’

We cannot rely on our conscience to always match God’s view. This is because the conscience is from God, but it is not God. We are all on a continuum stretching from new birth to perfection. And sometimes we are not very far along. Or moving very slowly. Or even slipping backwards in an area.

An example: however much you believe in your right to protect yourself from harm, if you carry a weapon into church, that’s an illegal act, and you will be coerced. For the common good. I think the signatories would all accept that coercion in this case is something that is reasonable by God’s Word (Romans 13:4).

If your COVID test has come back positive, it is likely that you are highly infectious. Therefore, whatever your conscience tells you about how much freedom of movement you should have, you won’t be allowed to come to church. Coerced. For the common good. I think the majority of the signatories would accept this coercion too.

If you are COVID unvaccinated, you are at greater risk of catching COVID. Whatever your reason for not being vaccinated. And you might not know that you have it. And then you can pass it on. The government may therefore require you and your unvaccinated friends not to attend an indoor function at the same time as those of your friends who are vaccinated. Whether or not the government institutes this requirement, I can see how a person using the wisdom of the Bible can come to the same conclusion. Others using their interpretation of that wisdom will not come to the same conclusion. This shows that it is not black and white like the Declaration suggests.

The Ezekiel signatories say that

A government that endeavours to force or coerce an individual who is striving to honour God, will find that they only encounter resistance.

We should all be ‘striving to honour God’. The fact that one or more of us resists the Government’s ‘coercion’ may mean only that we need to get a better sense of what’s right and wrong.

Let’s get….Back to The Gospel.

In an undated post on Cauldron Pool, three ‘Ministers’[1], a ‘Pastor’[2] and an Elder[3], recently ‘respectfully and dutifully’ urged our PM and the Premiers to “allow Christ’s church to gather together for public worship.” To date another 381 ‘church leaders’ have also signed ‘The Moses Statement’.

The body of the letter makes it clear that the subtitle ‘Let God’s People Worship’ is a reference to Moses’ repeated request to Pharaoh to ‘Let my people go’[4]. This occurred because God’s people, a great nation, were in soul-destroying bondage. They had no close relationship with God and no land of their own. Through Moses and a series of miracles, God not only delivered them out of slavery, but into a new relationship with Him. Huge.

What then is happening to Christians in Australia to justify the invocation of Moses?

Nothing. All that’s happened is that we have been stopped from gathering in our church buildings. Is this an action against churches? No. Against Christians? No. It’s merely part of a society-wide prohibition on gatherings because they are unwise on public health grounds.

Are we justified in seeking an exemption from restrictions on the grounds that God requires us to participate in ‘public worship’? If there is such a case, the authors have not made it. Including making no mention of the case for church leaders to protect their congregations from a disease that is highly contagious and potentially deadly.

On Thursday three Queensland Baptist pastors[1] published, on Cauldron Pool, a letter to our PM. It is an objection to the introduction of ‘vaccine passports’. They called the letter the ‘Ezekiel Declaration’. And their subtitle, ‘Watchmen, It’s Time To Speak’, made it clear that this was a warning from church leaders, the people who took over the role of the Old Testament prophets like Ezekiel).

The pastors don’t define what they mean by ‘vaccine passports’, but the content of their letter is consistent with this Australian Human Rights Commission explanation:

The pastors say that they are not the first in history to issue a warning about ‘vaccine passports’, quoting approvingly Abraham Kuyper’s 1880 equation of the threat from ‘vaccination certificates’ with that from smallpox. (Australia already has a vaccination certificate, so that boat has sailed, but if Kuyper had an objection to the use of the certificate to distinguish acceptable from unacceptable, the reference is valid.)

These pastors, and now 2011 church leaders who have signed the letter, say that

For many Christian leaders and Christians, this [the introduction of a ‘vaccine passport] is an untenable proposal that would inflict terrible consequences on our nation.

Their ‘terrible consequences’ are five: ‘an unethical two-tiered society’, ‘immeasurable pressures on ordinary people’, ‘coerced consciences’, ‘vaccines do not protect infection’, and Jesus is the only one who can legitimately restrict entry to church services.

Here’s the first one, the creation of ‘an unethical two-tiered society’[2]: 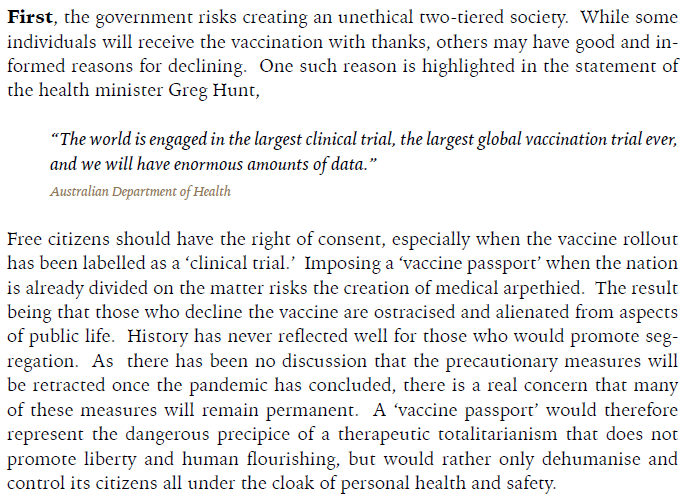 I can see how those who willingly get the vaccination form one group (but not a ‘tier’). But if there is only one other ‘tier’, then they have omitted a group in their second ‘tier’: those who have declined to be vaccinated but do not have ‘good and informed reasons for declining’. And if the people that I know are anything to go by, there are a significant number of people in this group who will, when presented with information, change their mind. The pastors are therefore either missing a ‘tier’ or overstating the strength of the ‘two-tiered society’. Of course, a binary conflict is the more powerful image.

One of these ‘good and informed reasons for declining’, the pastors say, is the belief that the vaccine rollout is a ‘clinical trial’. It is plausible that some people may believe this, but the pastors offer no evidence for the claim.

But it gets worse: the pastors then use a sentence taken completely out of context (and without proper citation), from a speech by the Commonwealth Minister for Health, to justify these people’s fear. Here’s the quote, highlighted, in context:

To suggest that the Minister was saying that the vaccines are still in the trial phase, is dishonest, and, to use the same yardstick that the pastors use, behaviour that is clearly contrary to Scripture.

The pastors then move on to claim that the proponents of the ‘passport’ are ‘promoting segregation’. Without evidence, this claim is beneath any right-thinking Christian, certainly a group of Christian leaders, and brings shame on the name of Jesus.

In the same emotive and unsupported way, they then claim that the ‘passport’ represents ‘therapeutic totalitarianism’, a totalitarianism and that would use the aim of the ‘personal safety health and safety’ of Australians to hide a measure that would ‘dehumanise and control’ Australians.

Conclusion on their first reason

The use of a ‘vaccine passport’ to determine whether I and my fellow Australians are eligible or ineligible for certain goods, services, and activities, may well be something that an evangelical Christian like myself should be against. But the authors of this letter, have not, through their first reason, made the case. (There are similar flaws in the reasoning for their other four claims.)

If you are looking for the charity reviews that used to be published on this site, please visit the charity Business by The Book (www.businessbythebook.com.au).